Flat plot in Denia with seaviews and sunny

Ref. 1307
215.000€
View property
Photos of the property
Book a View
Information about the Agency

Urban plot for sale in Denia. Very good location, in one of the best residential areas of Denia. Almost flat plot, very sunny and with good views of the castle and the sea. It measures about 925 m² gross and 811 m² net. It has water and light. 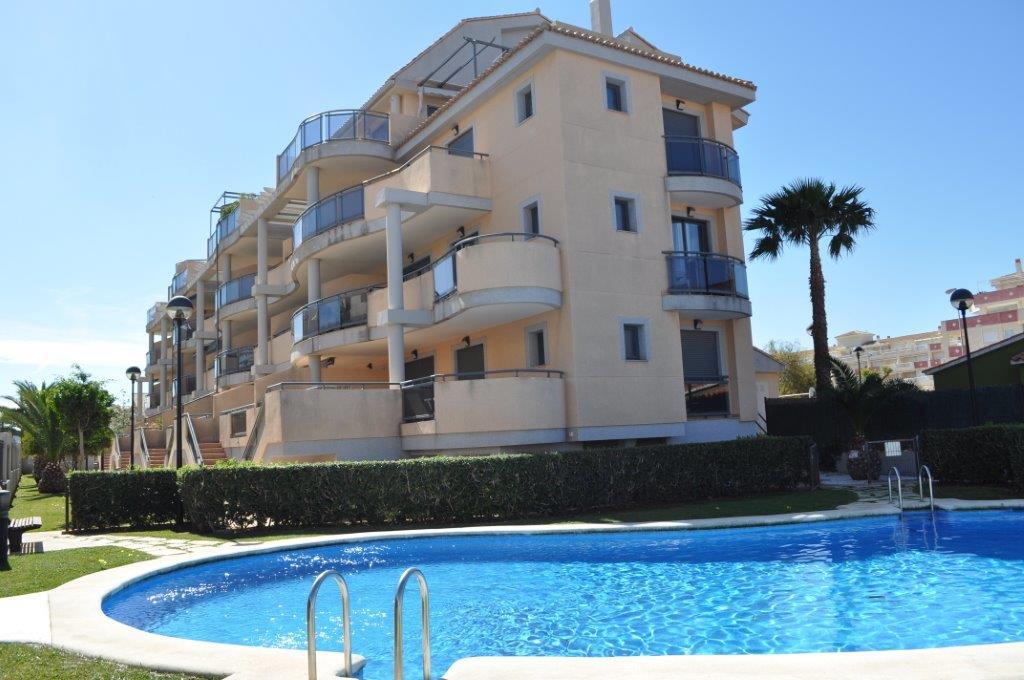 Ref. D3844
198.000€
View property
Photos of the property
Book a View
Information about the Agency

Apartment with 3 bedrooms (2 double and one single), 2 full bathrooms (one with bathtub and one with shower), fully equipped kitchen (microwave, washing machine, and dishwasher) and with utility room.Large livingdining room with access to the terrace of 30 m² with awnings.The building has an elevator. Armored entrance door, fitted wardrobes, preinstallation of air conditioning and garage.Very well maintained urbanization with swimming pool, children's playground and garden. 3,5 km from the towncenter and just 200 m from the beach.Ideal apartment to live all year round or as an investment. 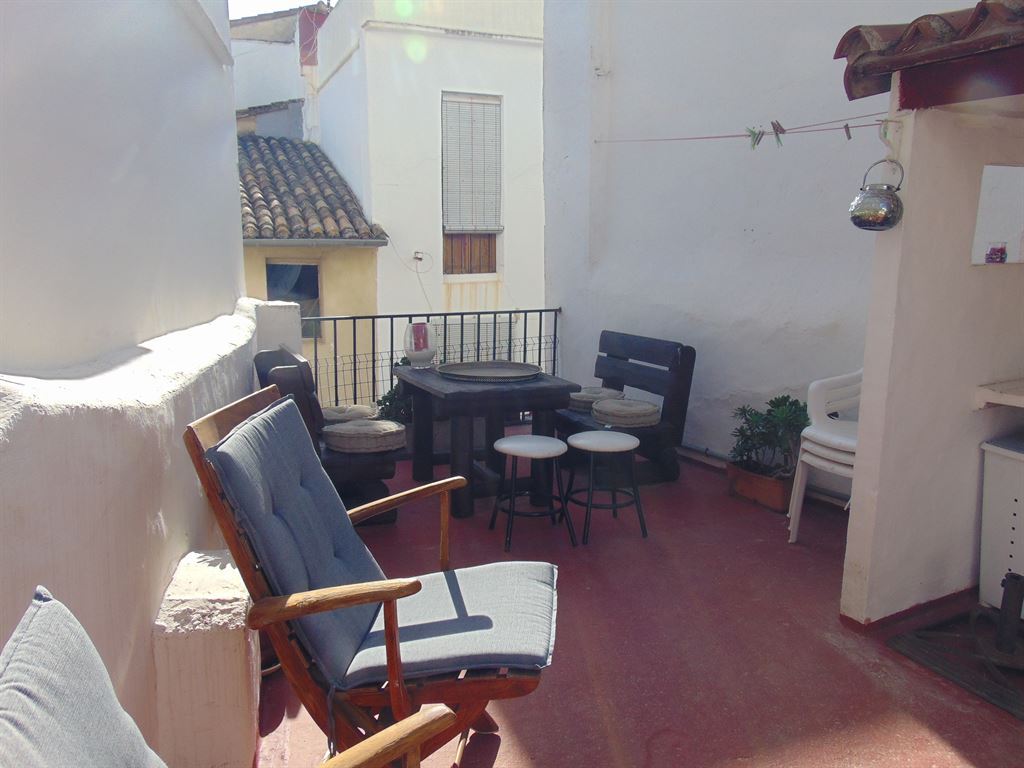 Ref. D3941
70.000€
View property
Photos of the property
Book a View
Information about the Agency

Village house on 2 floors in the urban center of Pego.
The ground floor is distributed in semi-open kitchen and dining room. By stairs you access two rooms, one with balcony, bathroom and solarium terrace.
The Terrace has a laundry corner and a very sunny and pleasant chill-out space to enjoy the long summer days.
Located in the center and a step away from all kinds of services.Ideal to live all year or enjoy your vacation.

Ref. HD2PAH
200.000€
View property
Photos of the property
Book a View
Information about the Agency

Building plot for sale with sea views in Altea Hills in Altea on the Costa Blanca of Alicante, 884 m2 plot, south facing, with underground telephone installation, lighting, hydrants for surface hydrants and sewerage, underground electrification and water supply. Obligation to build with the owner.

Altea Hills urbanization is located in Altea on the Costa Blanca of Alicante with the Mediterranean Sea in front and the Sierra Bernia behind it, in what can be considered a privileged environment in the most authentic Mediterranean style.

With enviable views of the bay of Altea and protected by the Sierra de Bernia, Altea Hills can be one of the most exclusive developments in the entire Mediterranean arch, where the resident can fully enjoy the Mediterranean lifestyle in its highest conception, clothed for the good climate of the area and for the level of excellence in the care of its facilities.

The urbanization has a security booth at the entrance with guards 24 hours a day, 365 days a year. A closed circuit TV that monitors the entire compound and several patrol cars ensure the entire perimeter of the urbanization. It also has a license plate control system for all vehicles entering and leaving the complex.

In Altea Hills the visitor can enjoy their privacy and tranquility in complete safety.

The strategic location of Altea Hills, between the sea and the mountains, makes this residential environment a unique place. Very close to the urbanization are the Don Cayo Golf Club and the prestigious Marina Greenwich Yacht Club, one of the best on the entire Mediterranean coast.

Apart from this, Altea Hills has among its facilities the luxurious Hotel Altea Hills, an excellent Tennis Club and an exclusive Spa Center for health and beauty, where famous artists and world-class athletes come to rest.

Altea Hills also has two restaurants, a cafeteria, three bars, an Irish pub, three outdoor pools, in addition to those in each urbanization, an indoor heated pool and two children's play areas.

Altea Hills has a special microclimate, with mild winters and mild summers, which invites you to enjoy a healthy life outdoors in any season of the year and to practice any kind of activity and sport, such as light sailing, windsurfing, cruising, swimming, golf, tennis, hiking, diving, fishing, etc.

Altea is located 50 km from Alicante, 10 km from Benidorm and 130 km from Valencia, in the province of Alicante, Costa Blanca. To the north it borders Benidorm and to the south Calpe. Its municipal term limits with municipalities such as Alfaz del Pi, Benissa, Calpe, Callosa de Ensarriá, Jalón and La Nucia.

Located in the bay closed by Punta del Albir and Morro de Toix. In its municipal term there is a district of the municipality called Altea la Vieja, in Valencian, Altea la Vella, at the foot of the Sierra de Bernia.

Altea holds the title of "Cultural Capital" of the Valencian Community, endorsed by the numerous Art Galleries, Foundations of Prestigious Painters, "Casal Fester" that houses the 25-year history of Moors and Christians, Faculty of Fine Arts of the University Miguel Hernández and the Palau Altea.

The Monastery Church of the Discalced Carmelites, La Torre de la Galera, declared of Cultural Interest, La Torre Bellaguarda, La Iglesia de Nuestra Señora del Consuelo where we can see the domes of the Mediterranean, the image and emblem of Altea, the old part very Well preserved with its white houses, cobbled streets and its viewpoints, the Palau de Altea and the Paseo Marítimo, they will provide you with images that will remain forever in your memory.

Along its 8 kilometers of coastline, Altea offers a wonderful diversification of beaches, coves and cliffs and the impressive Morro de Toix that closes the bay in the north. A wide inlet in which small coves and beaches follow one another until reaching the jetty of the port that puts its limit with L’Alfas del Pi, whose beach closes the inlet at the foot of Punta Bombarda and the Altea lighthouse. Along with a wide nautical offer, Altea has a golf club, located in the Sierra de Bernia.

Magnificent finca with sea view for sale in T...

Magnificent finca with sea view for sale in Teulada.

Magnificent 200yearold finca, which retains its essence but has been carefully restored to offer all the necessary comforts to its owners. It has south orientation and panoramic views of the sea, mountains and beautiful coastal landscape of the Costa Blanca. It is only 5 minutes walk from the town.

In the same plot there is a guest house also of two heights. It has naya, living room with open kitchen on the ground floor. There is also a storage room that can be converted into another bedroom. On the second floor there are 3 double bedrooms and 1 full bathroom.

Outside you can enjoy the large pool of 10.5x5m with terrace and outdoor shower, Mediterranean garden with automatic irrigation, two ponds, children's play area and barbecue.

The land is prepared to grow any type of vegetables. 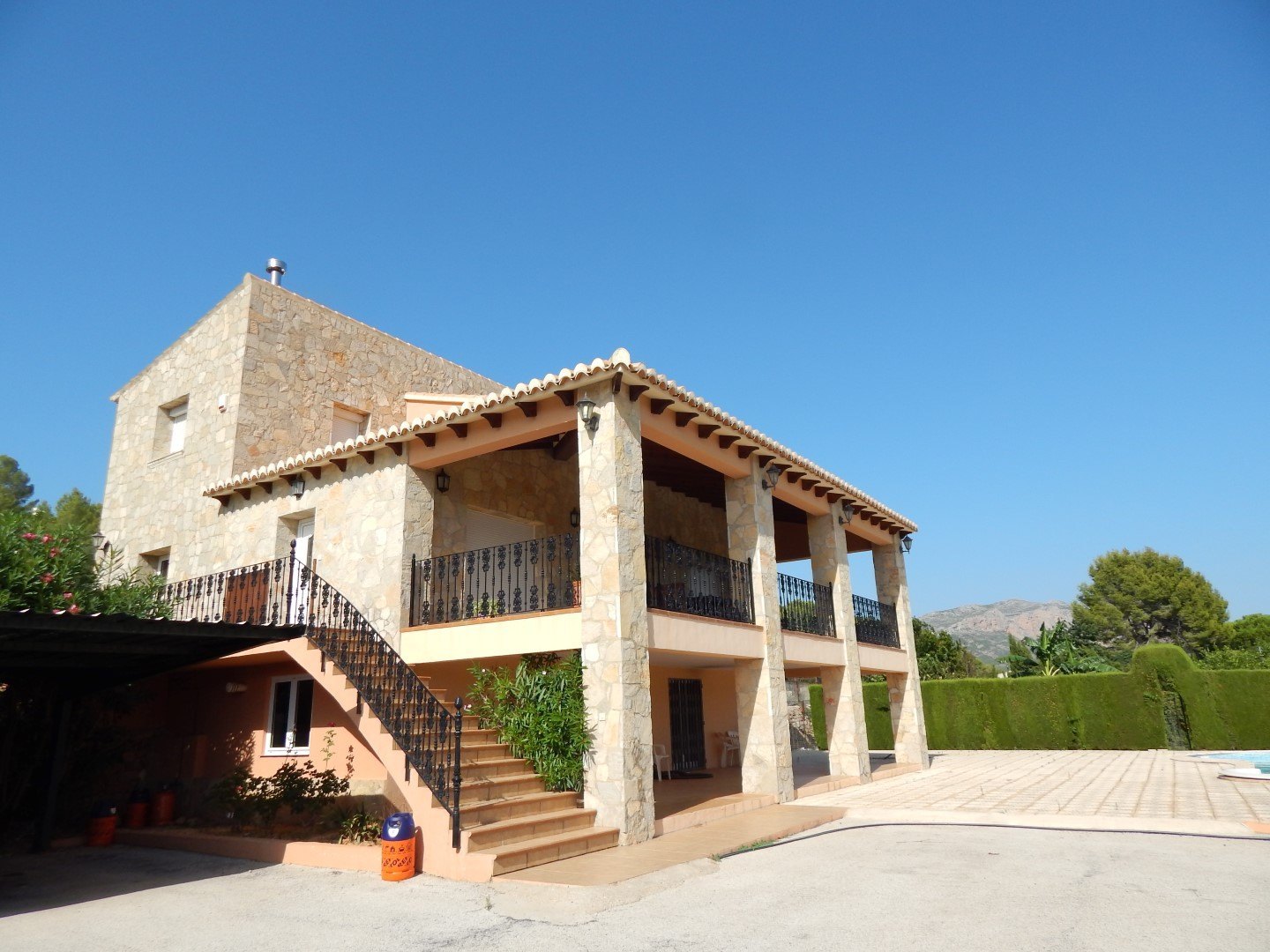 Villa in Denia region for sale

Ref. CHAPJD
650.000€
View property
Photos of the property
Book a View
Information about the Agency

Villa in Denia region near golf course La Sella, Pedreguer, fantastic location with panoramic open views to the valley. Built in stone rustic style house with 40cm thick well isolated walls . It has a high ceiling spacious living room with fireplace, fully equipped high quality kitchen, naya, terrace with views to the swimming pool and the valley. On the ground floor it has a separate apartment. The plot is 4500 sqm fully fenced and 4000 sqm more in the back of the house. There is the possibility to extend the land adjoining the next plot on sale also. Private pool and garden. Electric door. Sunny all day, south facing. 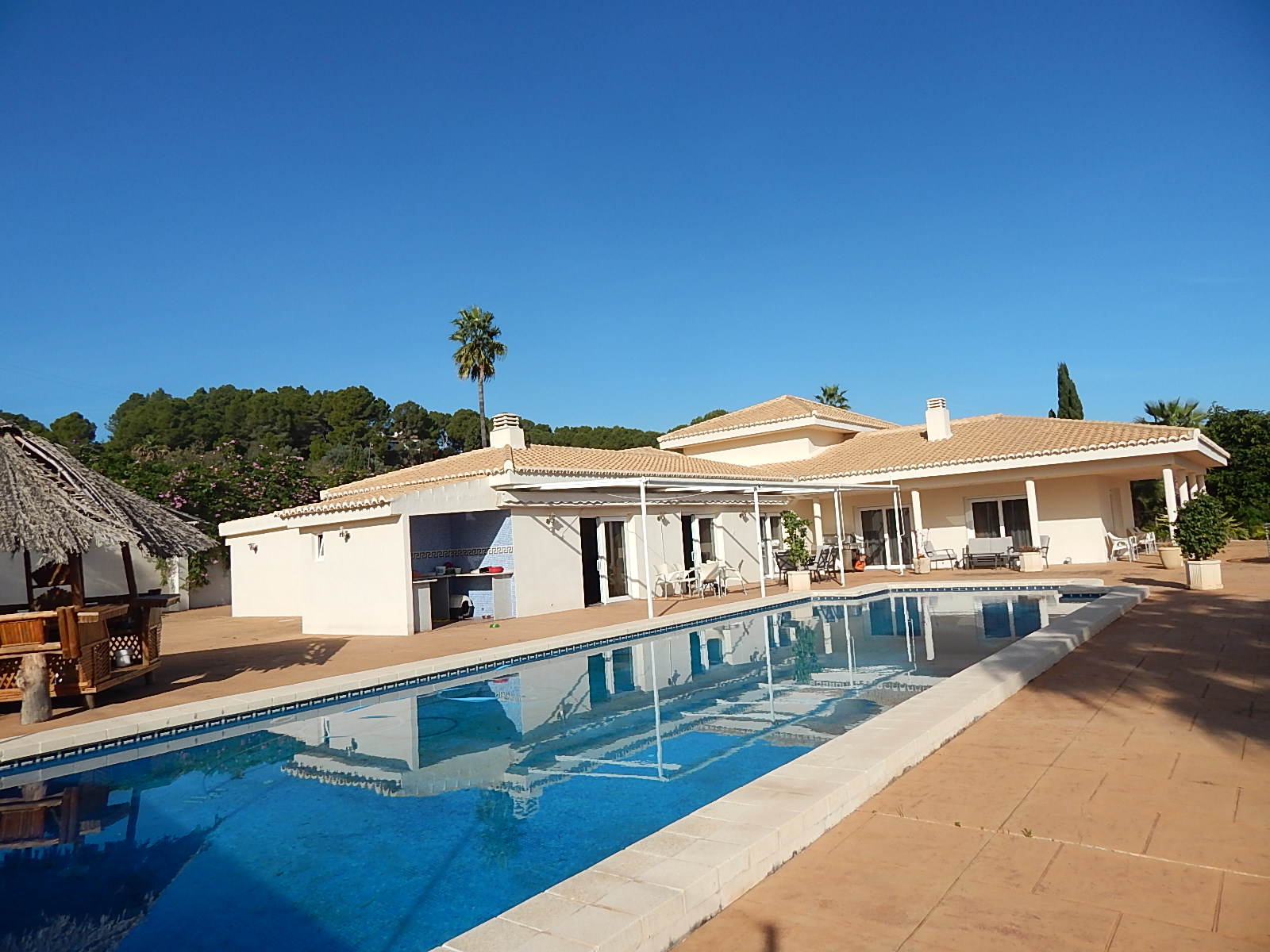 Villa in Oliva for sale

Ref. CHAAM1
1.539.000€
View property
Photos of the property
Book a View
Information about the Agency

House for sale in Oliva, Valencia. Large villa built with high quality standards. The plot of 6.500 m2 is perfectly landscaped and maintained. The villa is 600m2 al in on one floor, which makes it very comfortable and accessible for people of any age. It also has a basement where you can have a playroom, gym, movie room or apartment. Great panoramic sea views and next to a mediterranean forrest. Large drive way, parking for more than 10 cars and garage for 3 cars. Outdoor kitchen and BBQ. Water deposit. Airco in every room, underfloor heat. fire place, Every room has ensuite bathroom. Jacuzzi. Security glass windows. Marble floors. Totally private.

Ref. PENJALA
360.000€
View property
Photos of the property
Book a View
Information about the Agency

Spacious duplex penthouse in Denia. This great property of 110m and 103m of terrace consists of two heights, in the main we find two bedrooms, two bathrooms, a large living room, a kitchen and access to the large terrace with beautiful views of the Montgo. On the top floor we can find two bedrooms, two bathrooms and a small open room where we can make an office, children's playroom or a small living room.. Do not hesitate to contact us to visit this property that is located in a great area of the city, with schools, supermarkets and everything you need at the door step.

While physical viewings are currently not permitted for your safety during the pandemic you can still see this property with a remote viewing. The agent will arrange a time to call you & stream a live video from the property reference PENJALA.

Plot in natural surroundings of Denia.

Ref. D-012
126.000€
View property
Photos of the property
Book a View
Information about the Agency

Pretty plot near Denia with all the extensions for electricity, water and irrigation for mandarins and garden. Half is planted with mandarin trees and the other half is cleared, easy to build on a flat plot. 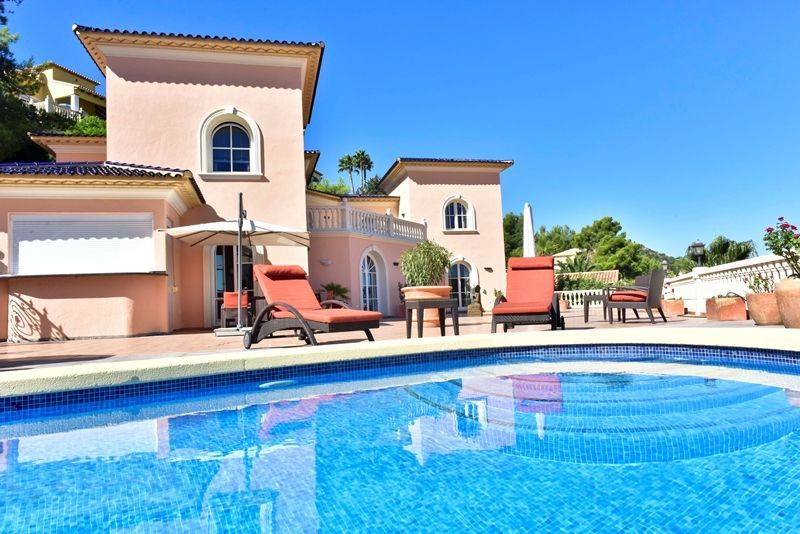 Villa in Denia for sale

Ref. CHAMK
1.399.000€
View property
Photos of the property
Book a View
Information about the Agency

Villa for sale with sea views in the DeniaJavea region located in La Sella Golf, right between Denia and Javea and just 6 km from the beach, with all the equipment and luxury comfort so you can enjoy it all year round. Built in 2006 and offers the possibility to expand and create an independent apartment with 125 m2. La sella offers 27 holes golf 6 tennis courts, horse back riding, pharmacy, restaurants, cafe, supermarket, reception, 24h security.